My book "Curses" is going to come out in a month or so, and reprinted in it are the 3 stories that originally appeared in Drawn and Quarterly Showcase Vol. 1. (The first of those stories is reprinted here.) Back when that book was being put together, before Anders Nilsen's story (what became Dogs and Water) grew too large for the book, Kelly Link was asked to write an introduction. After the book was changed around somewhat, Nilsen and Link were left on the cutting room floor.
So, for the first anywhere, here's the last part of what she wrote: 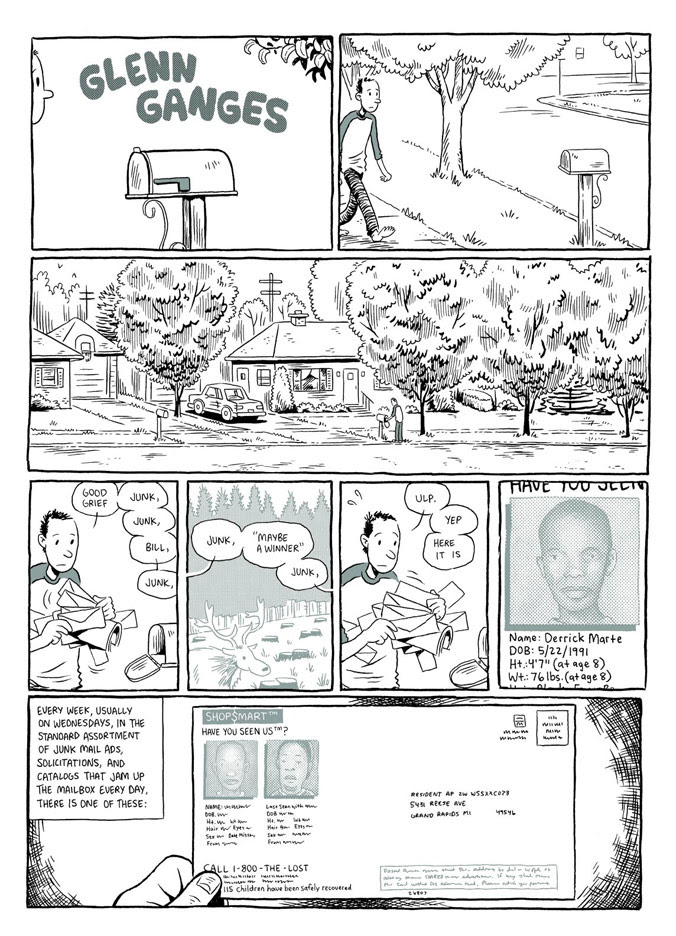 ...Lastly, there’s Kevin Huizenga’s three stories about a character named Glenn Ganges, who lives with his wife Wendy in suburban Michigan. I love Kevin Huizenga’s work, although I think those aliens would have a fair amount of trouble deciphering it [refers to something earlier in the intro obvs]. He reminds me of a deadpan, slapstick, surreal, suburban Herge. These are magical stories. “The Curse” manages to conjure up deafening noise, acrid stench -- the two senses that you wouldn’t think a graphic artist could capture. “28th Street” is one of the best fairytale retellings I’ve ever read. The third story, about lost children, says more sensible things about pictures and narrative than I’ll ever manage. “You can’t help but try to form a story in your head,” the narrator, Glenn Ganges, tells us about the pictures of missing children on advertisement fliers. “It adds up and becomes like an accidental graphic novel, whose story is mostly hidden, though sprawling landscapes and tragic scenes are hinted at. Every week two new faces and you imagine the scenes in between.”

Like the fliers, which are full of imagined transformations, helpfully depicting children who have aged -- even while missing -- listing information about parents and locations, Huizenga’s panels are signposted with words and names. There are the suggestive, diminished names of stores -- there’s Eden’s, and Paradise Bagels -- and slogans on t-shirts, newspaper stories about Sudanese refugees, historical and observational data about starlings and suburban sprawl. There are wordless transformations, too. Pictures of the missing children suddenly lift into the sky and become a murmuration of starlings. A curvy suburban road branches off and in the next panel it’s a tree full of noisy bird -- starlings again. A Mega Mart is a President’s Palace, or possibly the entrance to the feathered ogre’s subterranean cave. Squirting gasoline from the pump straight into the eyes, rather than the tank, brings on visions that change a strip mall into a scene out of Hieronymus Bosch, with Lovecraftian beasties, Native American-style totem animals with wings and hooves and staring eyes, and even those uncanny ghosts from Ms. Pacman. The panels begin to seep and drip darkness, like a kind of smog out of which appear starlings, a moon like an enormous egg, and finally, the strangest thing of all: Eden’s, the Mega Mart.

Like the other two artist/writers in this anthology, Kevin Huizenga is writing about a quest, a journey. Along the way, the narrator discovers a styrofoam take-home container is an enchanted, battery-operated doggybag of plenty. A monster explodes with rage, and breaks into dozens, hundreds, thousands of starlings, all of them croaking curses (except for one, which says “cheep”. After all, they are in the basement of the Mega Mart.) The stories are crammed with other visual jokes and references, like the guy with a moustache in the advertisement on the back of a missing children flier, paid to appear “thrilled with modernistic carpet cleaning”. He looks familiar to Glenn. He looks familiar to us as well -- maybe he’s the neighbor, Karl, from down the street in one of the other stories, “Curses”, who recommends using a bottle rocket to get rid of the starlings. And of course, maybe getting your carpet cleaned will help locate a missing child, the way praying to Baal, or stealing a feather from the ogre will break the curse so that Glenn and Wendy can have a child of their own.

Meanwhile, while Glenn is fretting about the missing children, the Sudanese refugees -- the “lost boys” -- who have been brought to America, are lost again, right under Glenn’s nose. They’re trying to navigate their way through the suburban landscape. It isn’t easy. So why do you even bother?

It all comes back to whether or not Glenn and Wendy will manage to have a baby. In the end, will everyone’s problems be solved? Sure. The waitress, the gas station attendant, the Sudanese clerk at Eden’s, Glenn and Wendy, everyone gets a piece of what they need. But even when you’ve stolen the ogre’s feather to break a curse, and you’re all set to live happily ever after in the suburbs, there are still difficulties. When you break a curse, it just breaks into smaller pieces, after all. The new baby won’t stop crying, and all the starlings (little, black curses) have come home to roost in the trees in your yard. But, as the narrator reminds us, the starlings aren’t just a curse. It isn’t just noise. They sing. They’re performance artists. They can mimic cell phones, dogs barking, car alarms, Latin and Greek and Mozart: all the same kinds of things, both magical and decidedly unmagical, that an artist/writer can draw on. In “28th Street,” it’s a starling who gets to have the last word of the story -- “The End” -- but it’s Kevin Huizenga who set him to sing.

-Kelly Link, from the unpublished introduction to Drawn and Quarterly Showcase #1. 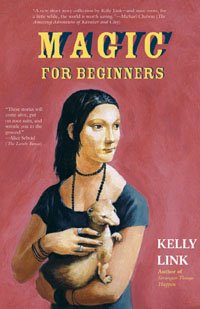 (I highly recommend her wonderful short stories, especially the title story of her collection Magic for Beginners. Many stories from that collection made a big impression on me and have really burrowed into my head.) 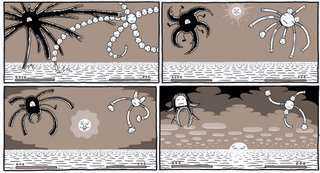 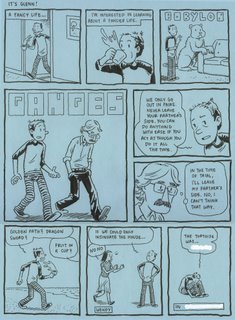 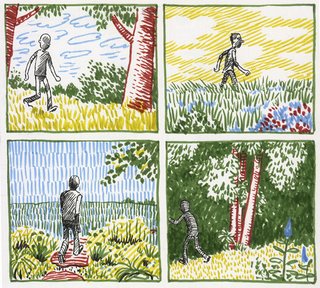 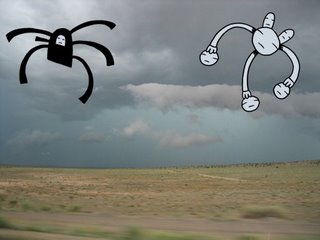