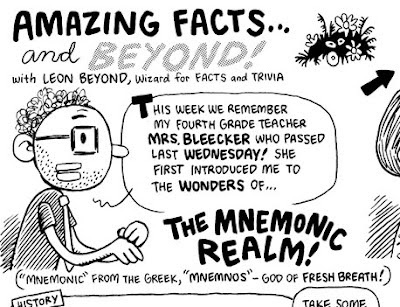 If you haven't noticed yet, the USSCatastrophe Called Quest are doing a new strip here in STL. It's about interesting facts and trivia. You can read about it here on DZA's blog, and click here for the strips. Pictured is a "taste" of the next installment which appears I think in 2 weeks.
1 comment:

Email ThisBlogThis!Share to TwitterShare to FacebookShare to Pinterest
Tags: Amazing Facts and Beyond

The Rare Sound of Laughter

Exxon Mobil, the giant oil corporation appearing before the Supreme Court yesterday, had earned a profit of nearly $40 billion in 2006, the largest ever reported by a U.S. company -- but that's not what bothered Roberts. What bothered the chief justice was that Exxon was being ordered to pay $2.5 billion -- roughly three weeks' worth of profits -- for destroying a long swath of the Alaska coastline in the largest oil spill in American history.

"So what can a corporation do to protect itself against punitive-damages awards such as this?" Roberts asked in court.

The lawyer arguing for the Alaska fishermen affected by the spill, Jeffrey Fisher, had an idea. "Well," he said, "it can hire fit and competent people."

The rare sound of laughter rippled through the august chamber. The chief justice did not look amused.

"...rippled through the august chamber."
What a sentence.
No comments: 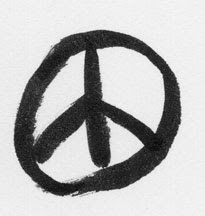 Today is the 50th anniversary of the Peace Symbol. When I was in junior high school, circa 1990-1, one of my teachers told us that the symbol was anti-Christian, designed as an upside down cross with its arms broken downward, which is how Apostle Peter was crucified. Unfortunately it wasn't until years later that I learned that this was not the case.
2 comments: