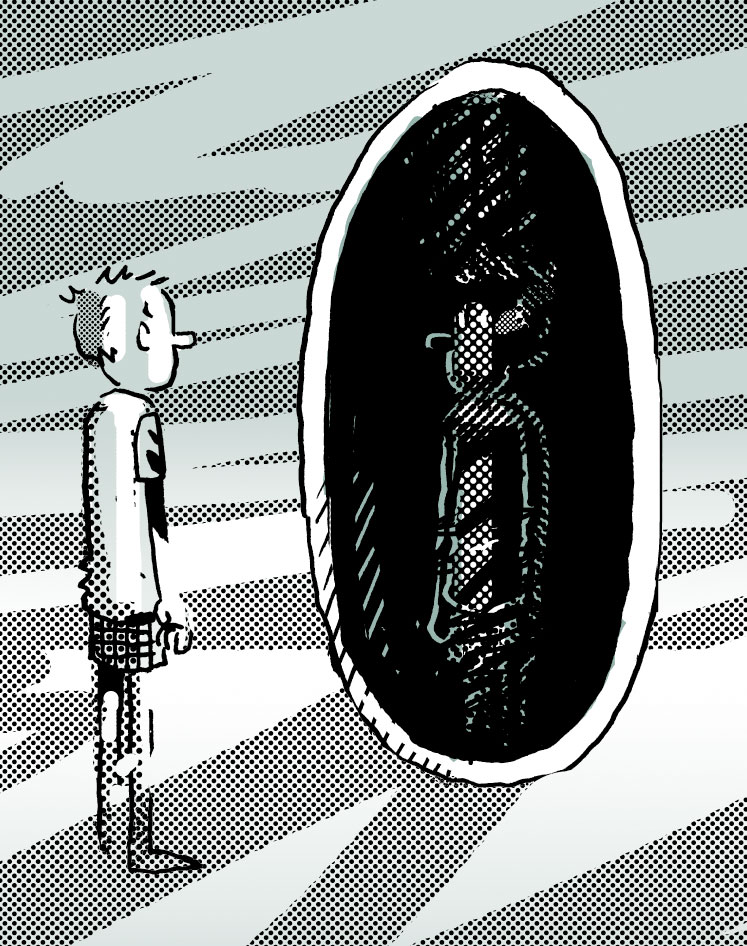 Naturally, there are half-way stages in this scheme of things. Some babies do not quite give up hope and they study the object and do all that is possible to see in the object some meaning that ought to be there if only it could be felt. Some babies, tantalized by this type of relative maternal failure, study the variable maternal visage in an attempt to predict the mother’s mood, just exactly as we all study the weather. The baby quickly learns to make a forecast: ‘Just now it is safe to forget the mother’s mood and to be spontaneous, but any minute the mother’s face will become fixed or her mood will dominate, and my own personal needs must then be withdrawn otherwise my central self may suffer insult.’
Immediately beyond this in the direction of pathology is predictability, which is precarious, and which strains the baby to the limits of his or her capacity to allow for events. This brings a threat of chaos, and the baby will organize withdrawal, or will not look except to perceive, as a defense. A baby so treated will grow up puzzled about mirrors and what the mirror has to offer. If the mother’s face is unresponsive, then a mirror is a thing to be looked at but not to be looked into.
To return to the normal progress of events, when the average girl studies her face in the mirror she is reassuring herself that the mother-image is there and that the mother can see her and that the mother is en rapport with her. When girls and boys in their secondary narcissism look in order to see beauty and to fall in love, there is already evidence that doubt has crept in about their mother’s continued love and care. So the man who falls in love with beauty is quite different from the man who loves a girl and feels she is beautiful and can see what is beautiful about her.

-DW Winnicot, from Playing and Reality 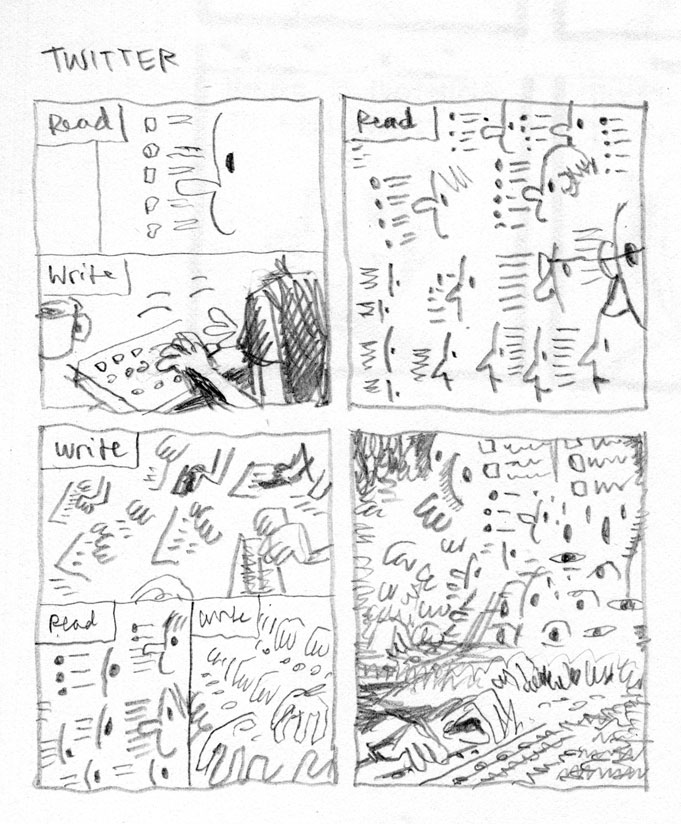 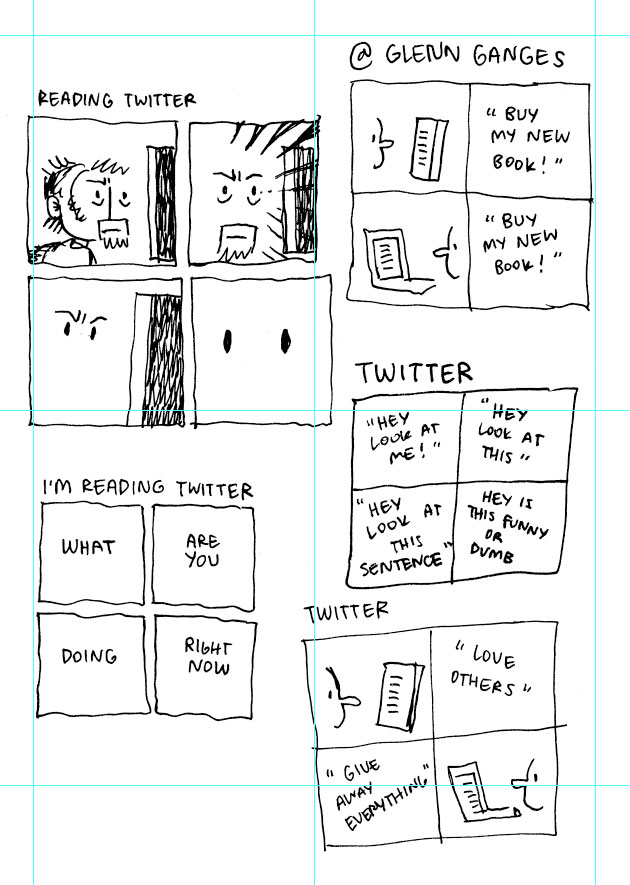 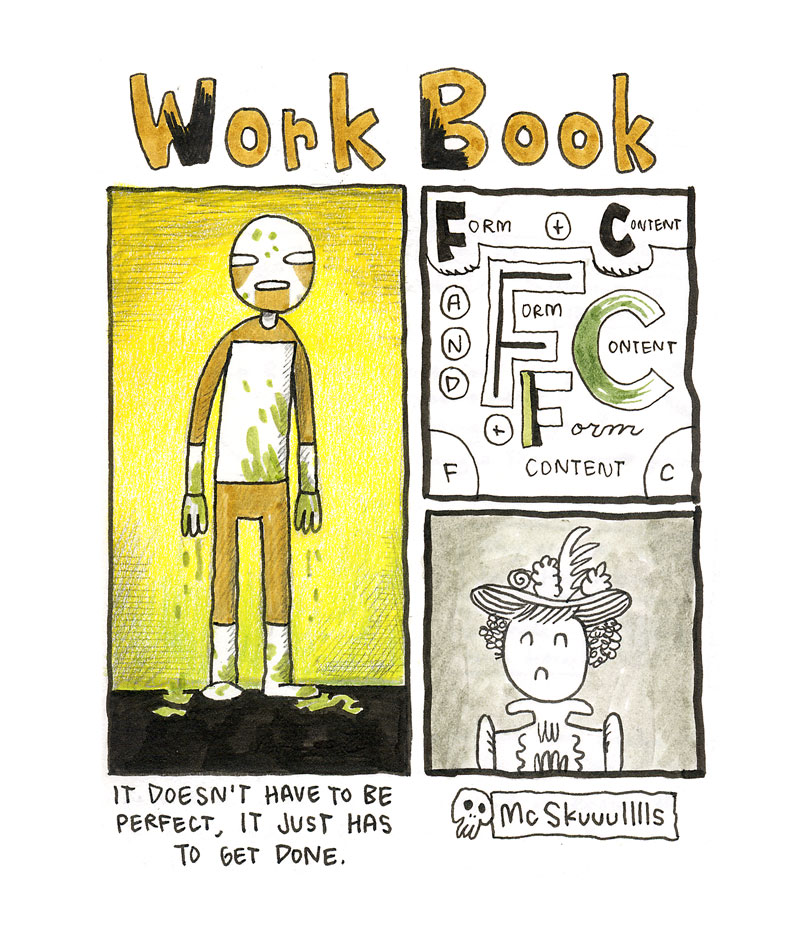 bin crawler - Gets at one of the real pleasures of comics (and good comic book stores), the half-painful, half-amazing experience of going through comics bargain bins, wondering at the weirdness of everything, lost in browsing, scanning page after page, until your eye is seized by some amazing weird cover, panel, page, drawing, etc., something weird or transcendently weird or intense or funny or profound or all of it together. Who knows what else might be waiting in those boxes? There's much more weird amazing stuff on the internet, but of course it's not the same.

I came across this video by accident. For a while I played this every time I was on the internet. It was my "home page" when the browser opened. It sometimes became background noise, sometimes became so un-ignorable that I would be snapped out of my Internet trance, and for a moment the rhythmic wind sound in the microphone, the air-static-noise would seem like the amplified sound of the air going in and out of my own body, and I could stop and feel like someone in a room again and think "Is this what I want to be doing? Am I stuck in an Internet Kettenkarrussel trance??? How's this going? How long am I planning to be on here?" This way the internet has a sound, so that when I'm on the internet, it felt like a thing, something with texture, not so abstract and unreal. And then when the sound is gone you can think, oh, it's gone now. The internet is gone.
1 comment:

Email ThisBlogThis!Share to TwitterShare to FacebookShare to Pinterest
Tags: links 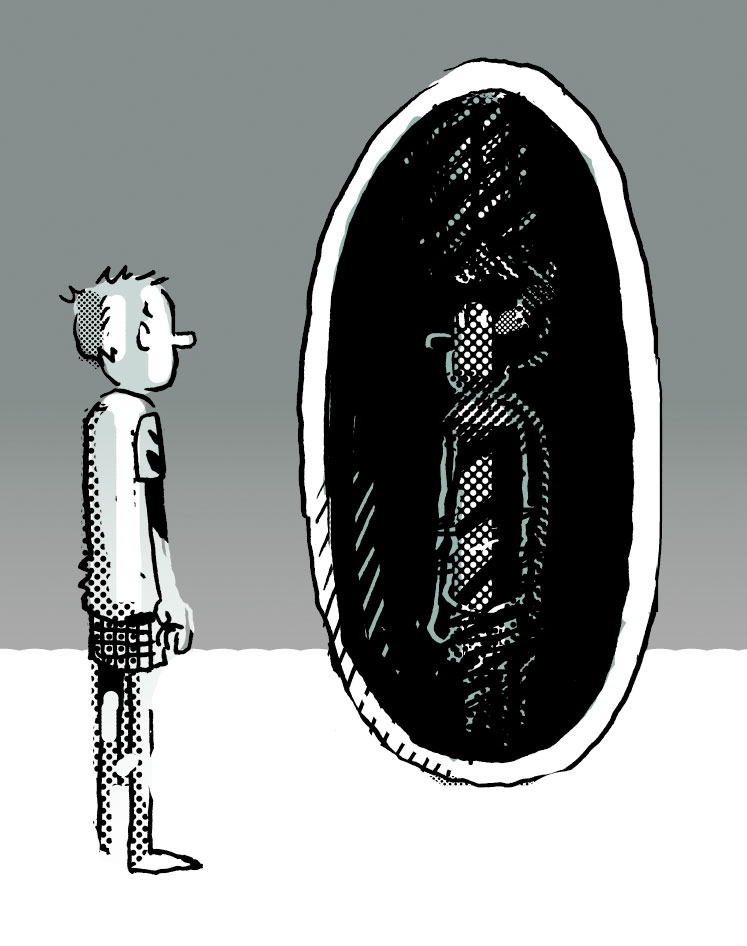 "Push your face closer to the mirror, until your eyes can seemingly look into themselves (they include the other in their peripheral vision). Now focus on the world behind you, over your shoulder. What are you seeing? You are seeing the world behind you, while at the same time in the corner of your eye, you see your own eyes turned to the side. You see yourself looking. Now look back at your face. For a second, you see one eye, then your vision “snaps” to the “correct” focal length to see your face. Maybe your nose is so big, like mine, that it is somewhat out of focus if you look into your own eyes. Suddenly you see your familiar “2D” face is really in 3D. It’s disturbing, unusual, distancing. The sequence of focus on one thing, then on another, all the while knowing that you are looking at one continuous face (something that you usually don’t experience when looking at faces, this sequence of movement and focusing). You’ll feel a kind of vertigo, but remember, you’re right here, the actual 3D you, the whole time, looking into a mirror. If you felt some vertigo as you “moved and focused” back into your “true self,” that is the point.
We see ourselves and then we see a frame and then we see the wall and a ghostly image of our nose, and we see, out of the corner of our eye, someone (us?) in a flat surface on the wall, who also looks like we are looking down and to their (our?) right. It is difficult to explain, it is easier to just go over to a mirror and look."

-quoted from Jean Luc Heilegra, The Method and Being Notebooks Vol. 1. 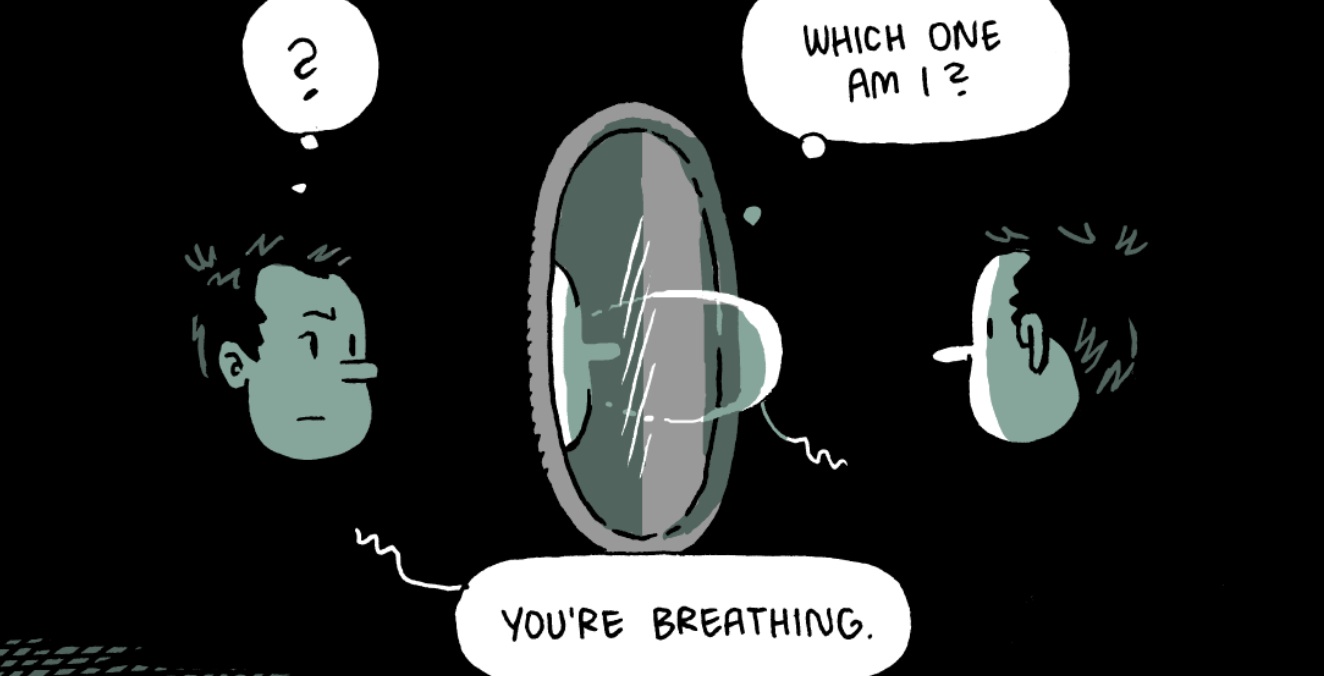 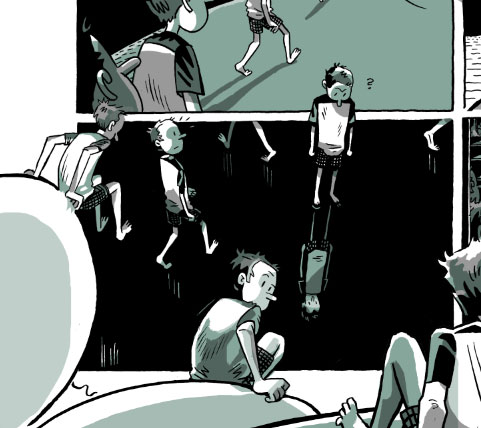 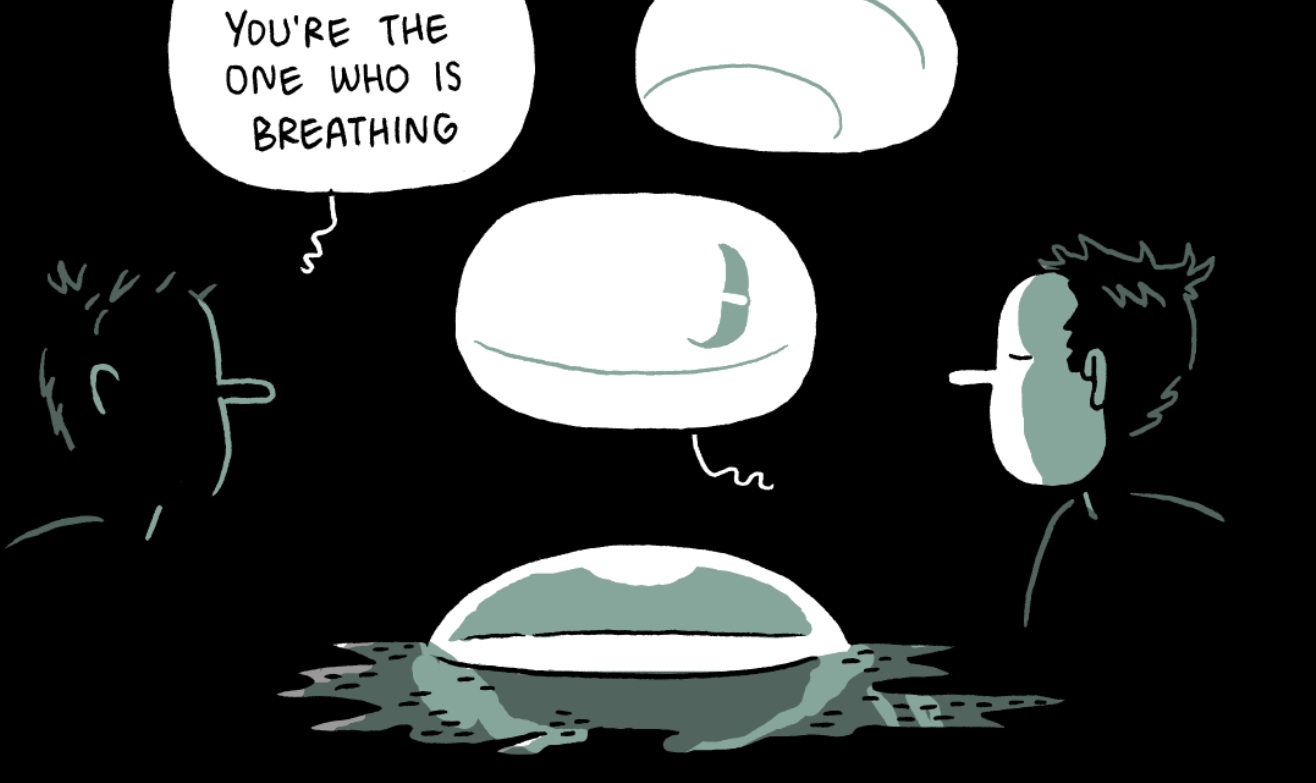 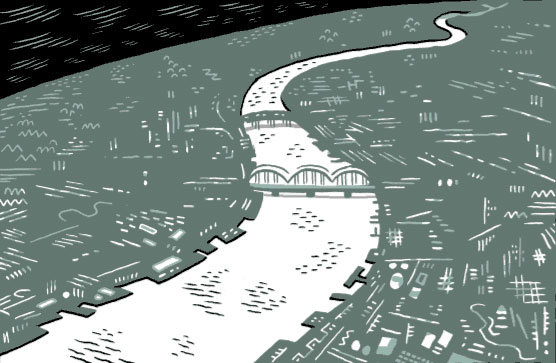 preview of Ganges: The River at Night
No comments:

Email ThisBlogThis!Share to TwitterShare to FacebookShare to Pinterest
Tags: Ganges 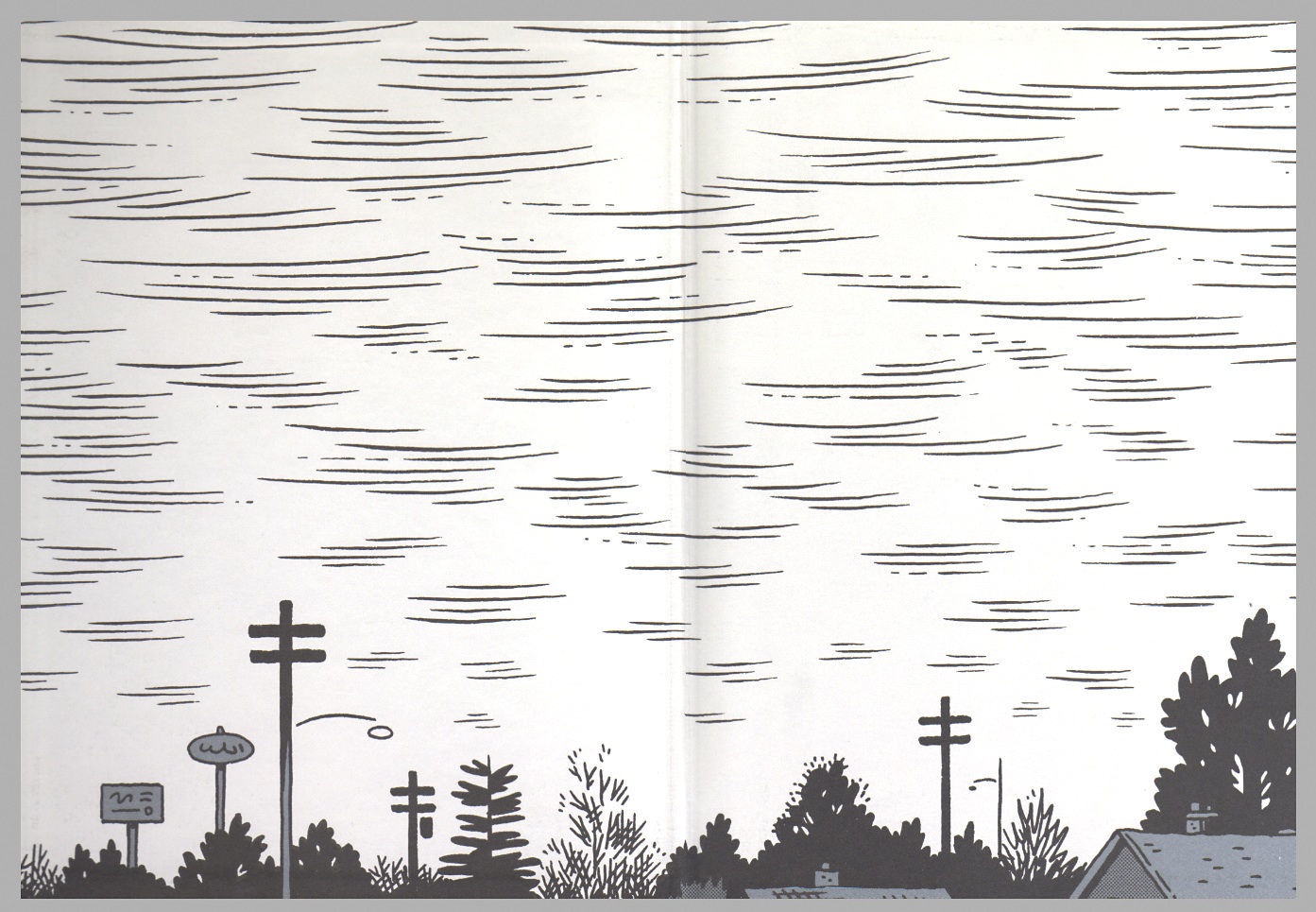 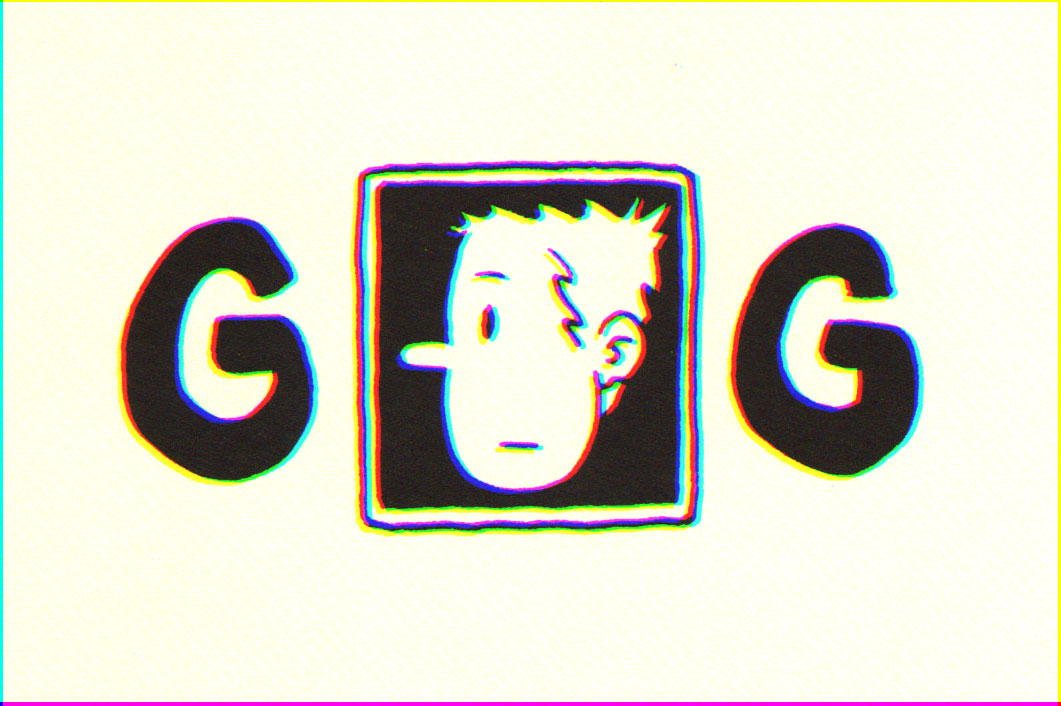 Email ThisBlogThis!Share to TwitterShare to FacebookShare to Pinterest
Tags: Curses 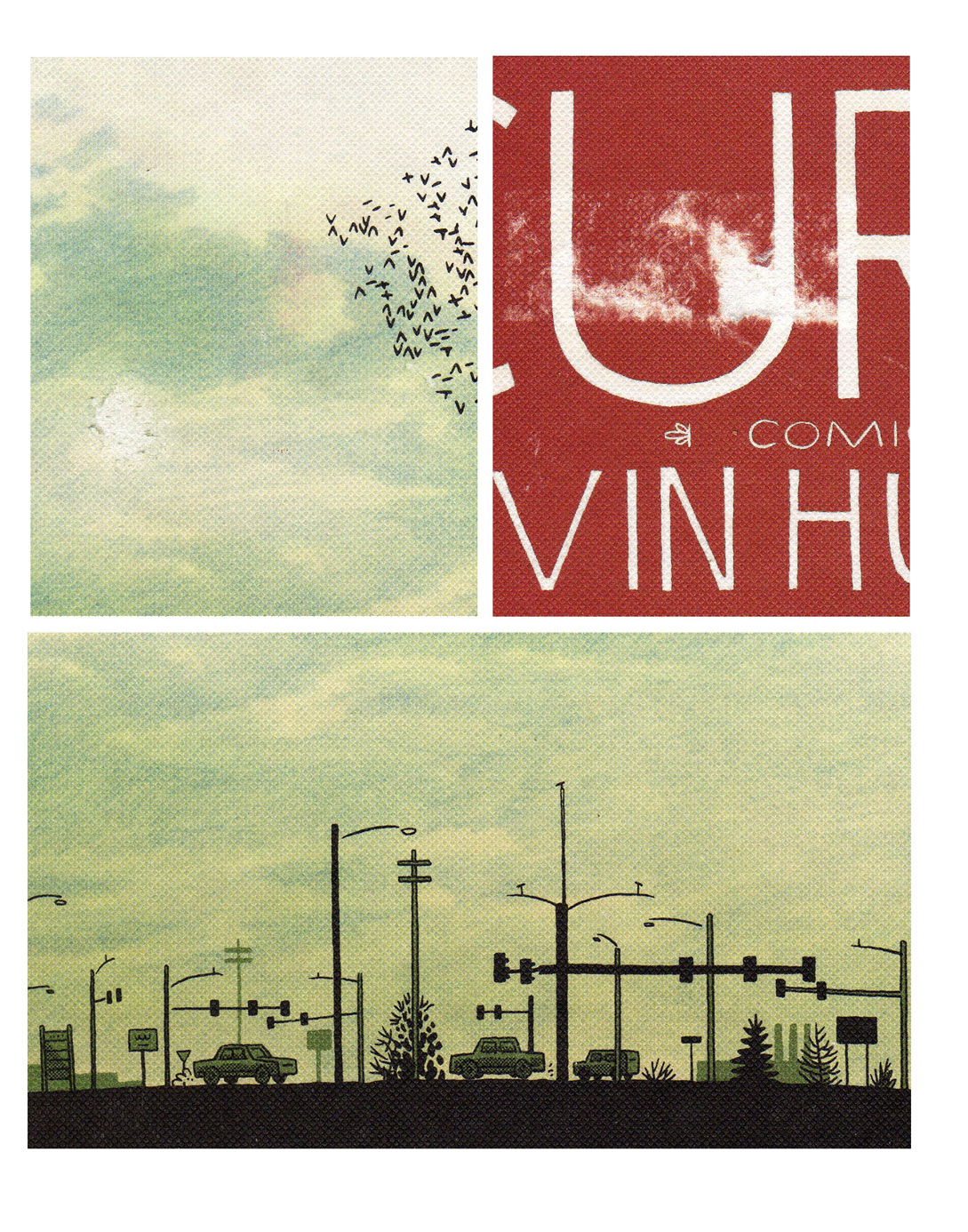 As I get a little closer to the Ganges book I’ve been thinking a bit about Curses, my first book, from 2006. Here’s a link to a big scan of the cover (8MB) that I took off of a pirated online copy. You might enjoy zooming in on the textures and the cars, etc. if you have a big monitor, or even if you don’t.
No comments: 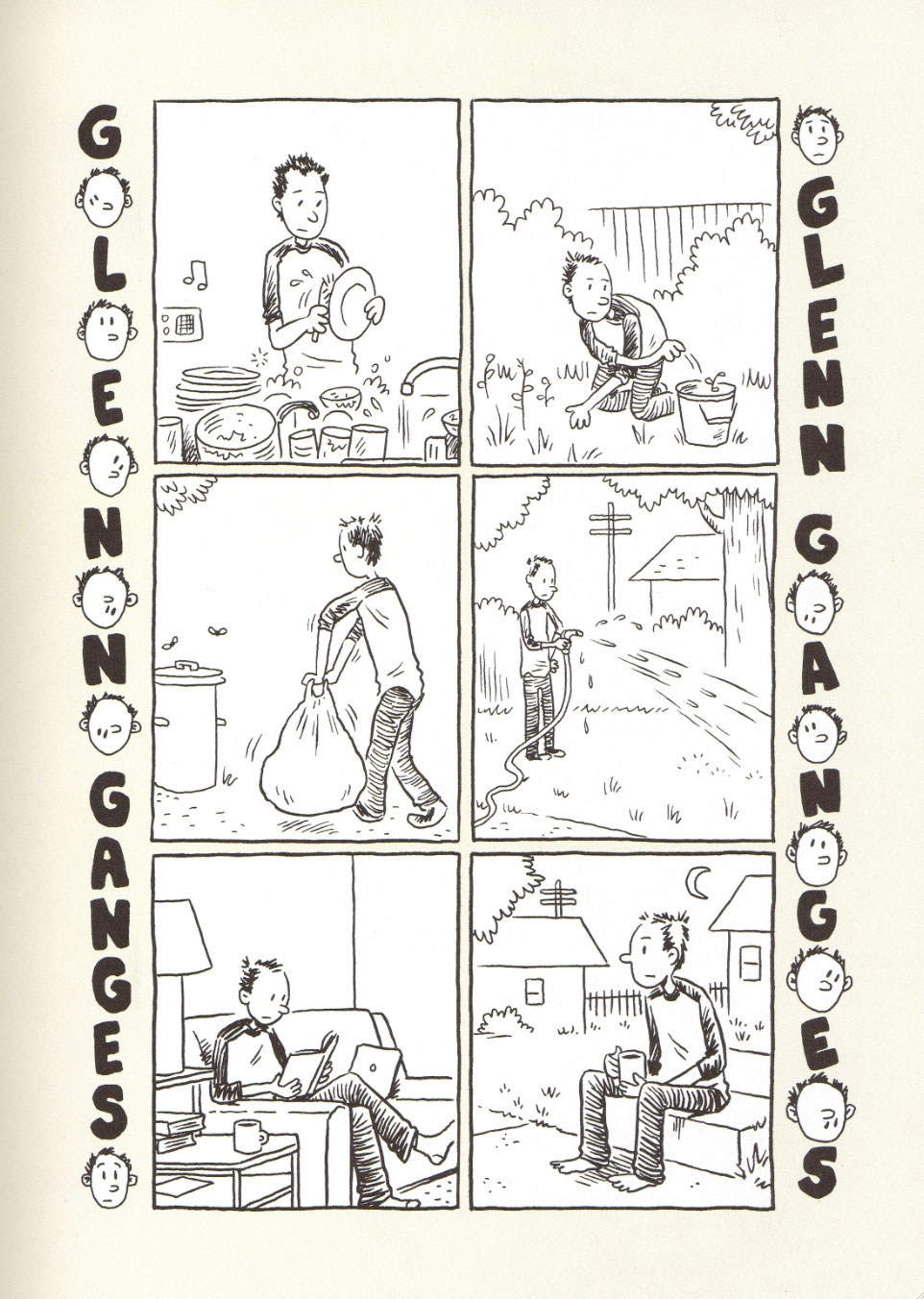 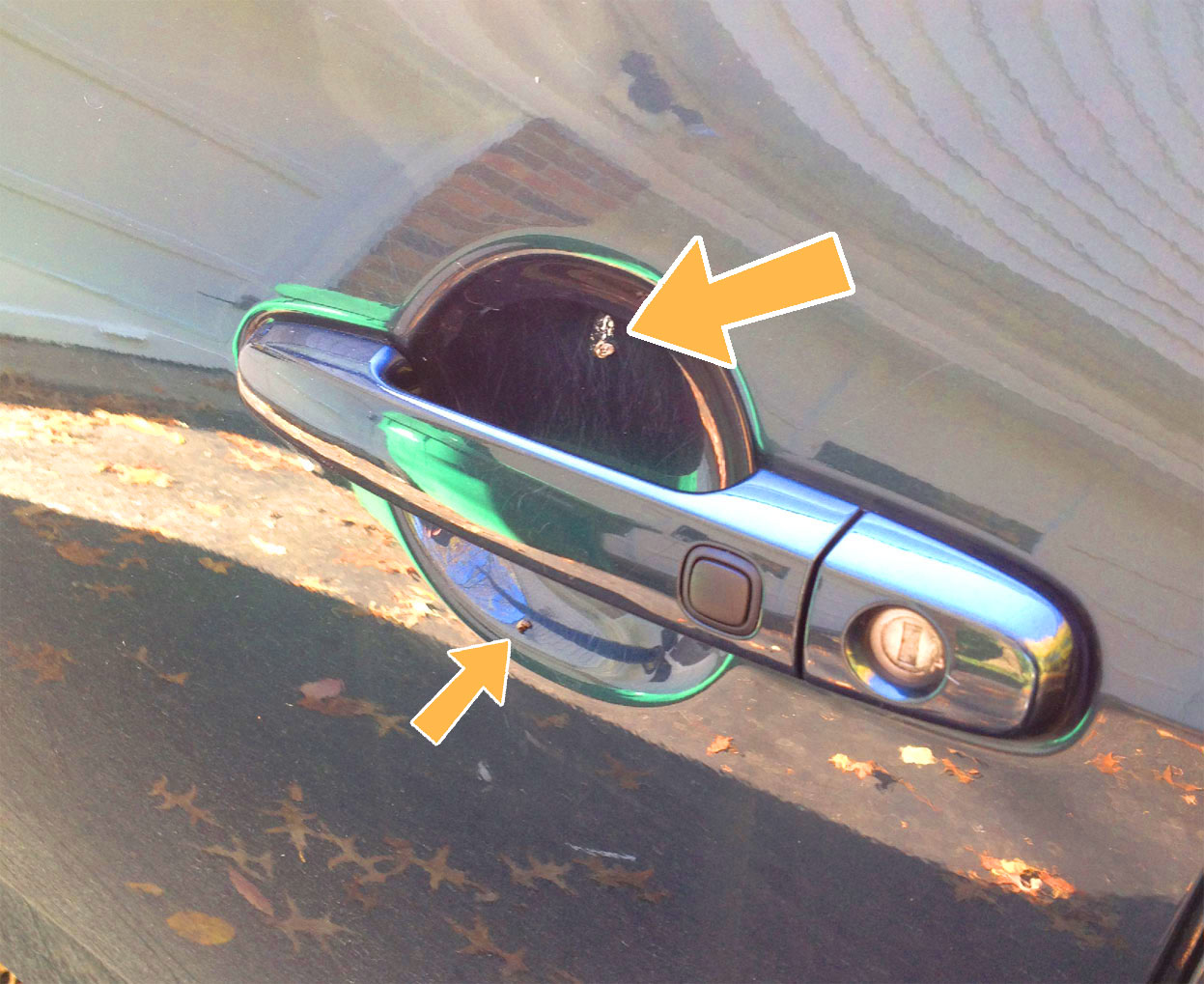 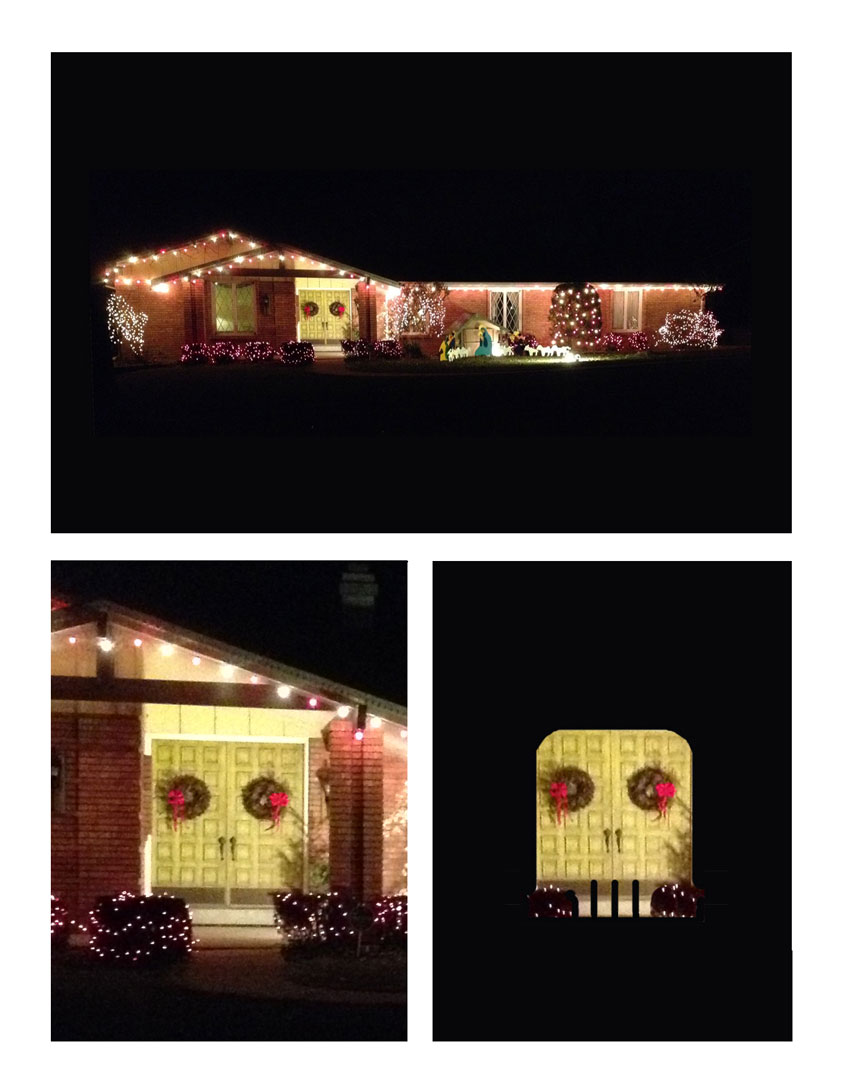 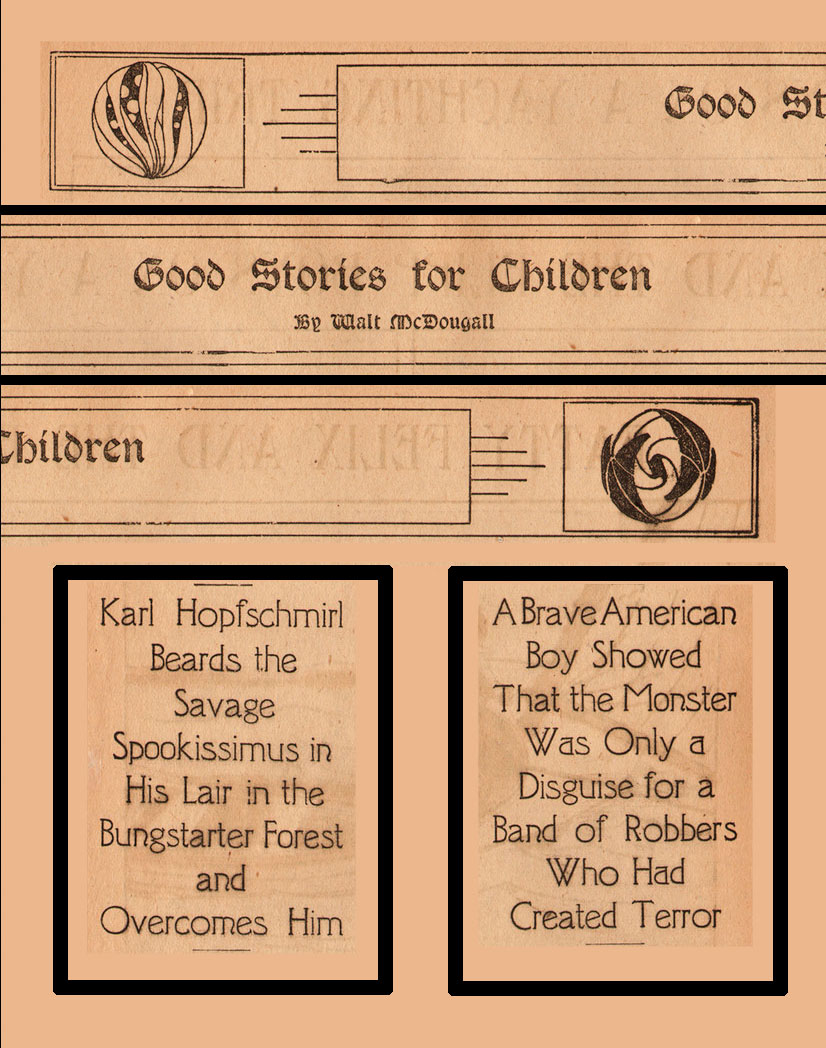 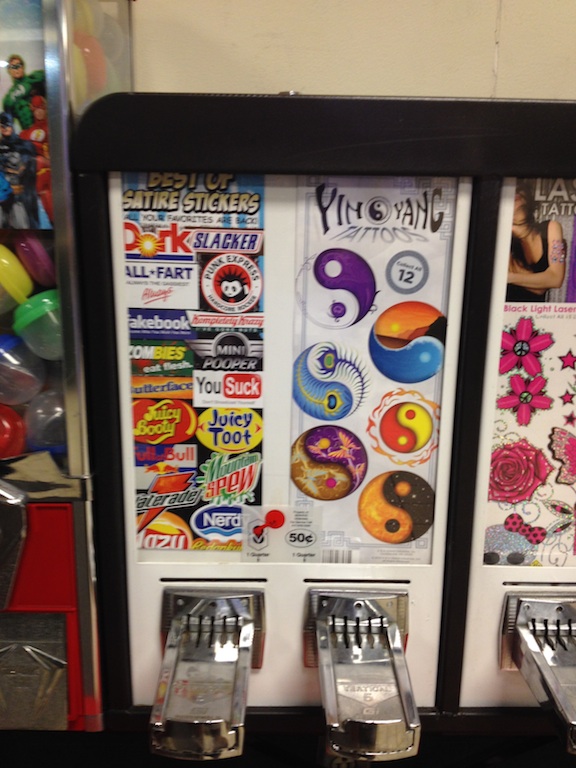 "Awakening, Glenn Ganges can sense where the 2D mirror ends and the 3D space he feels his body inhabiting. He looks into a mirror, fully aware of both what he is doing and what it means. "
-Jean Luc Heilegra, Method and Being, fig 2., note I: "Gangeses" 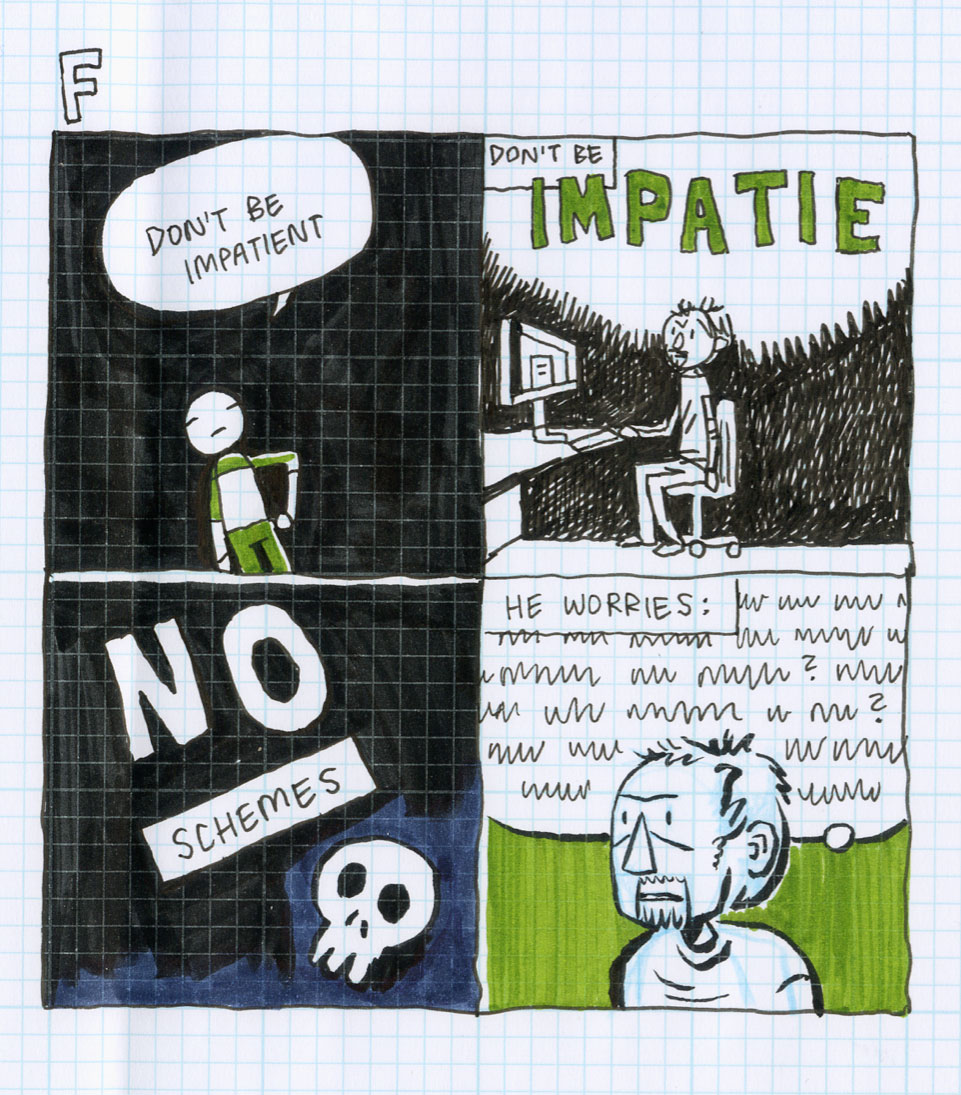 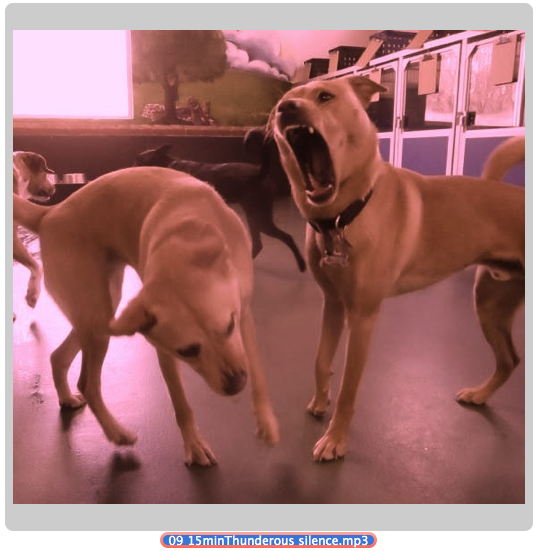 "Whence this character of universal spirality?"

Email ThisBlogThis!Share to TwitterShare to FacebookShare to Pinterest
Tags: links

from upcoming Ganges
No comments:

Email ThisBlogThis!Share to TwitterShare to FacebookShare to Pinterest
Tags: Ganges 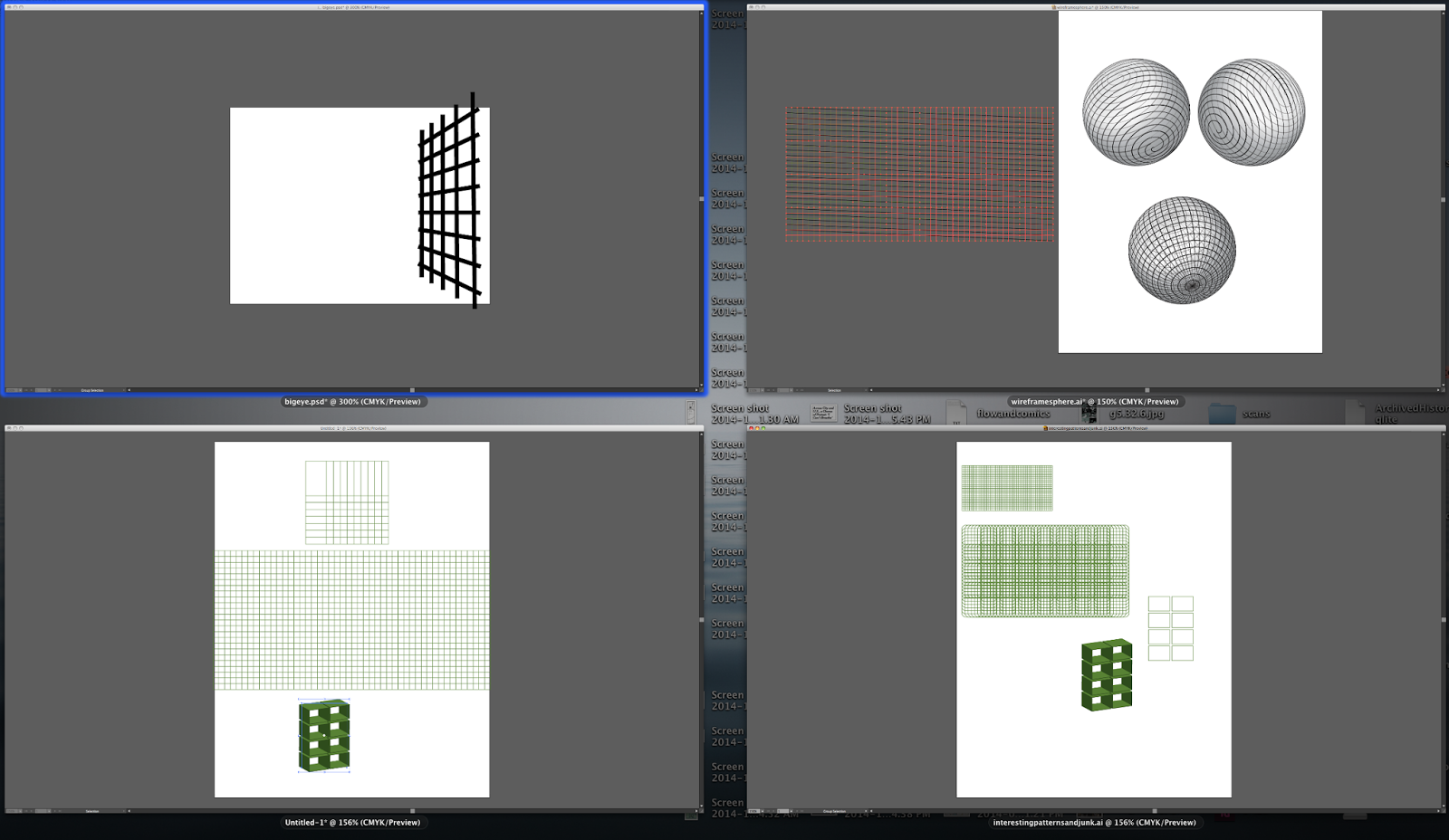 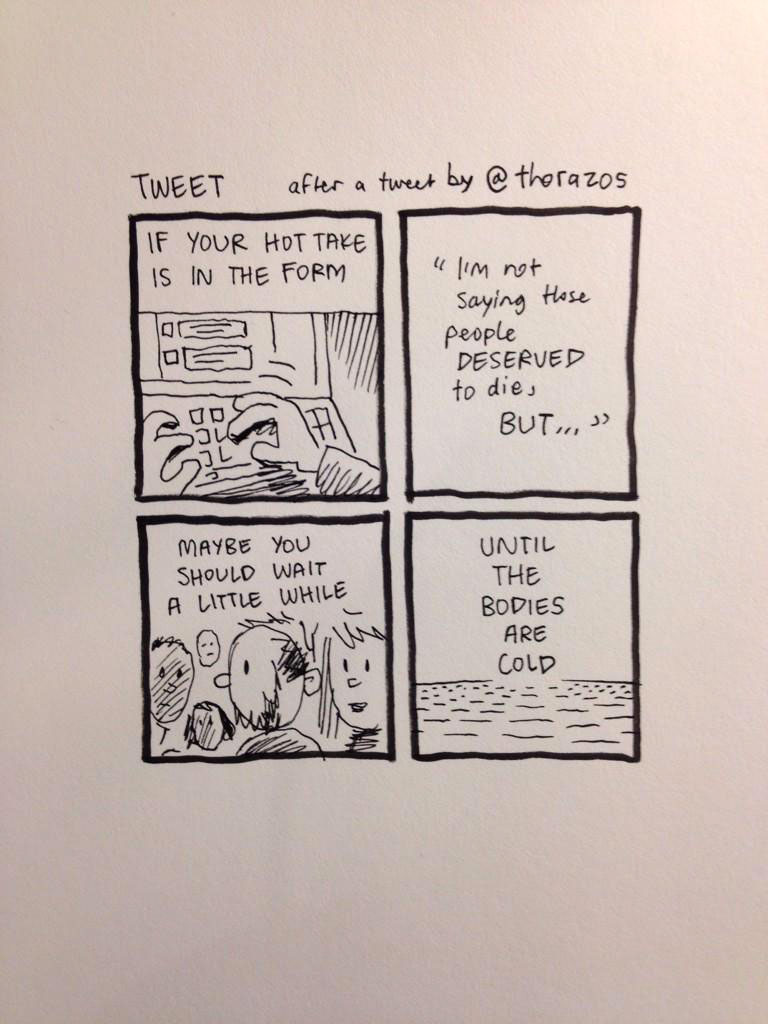 Drew this last Thursday, the day after the C. Hebdo attack. This tweet struck me in part because of the hot take vs. cold bodies setup, as a way to measure time, and as a way to allude to the aggression human beings feel as they try to communicate with each other, urgently, aggressively, clumsily, and also because the other hot topic of conversation on the internet that morning in my internet social media "circles" was how the weather was across much of the country was extremely cold. It struck me that there are different times for everything, and at the same time, of course, timing is everything. When it's cold and dark, like in the winter, or in times of fear and violence, one of the things it's good to do is to just sit together, rest for a while, silently or just saying what's necessary, nothing more, giving everybody as much space as they need to heal and be sane, but maybe sitting a little closer than usual, to fit a few more, come on in, sit down, there's plenty of space. Taking everything a little more slowly, sharing things, good food, warmth, pleasant sounds or silence, seeing and being seen, in a sort of animal togetherness, out of the wind. 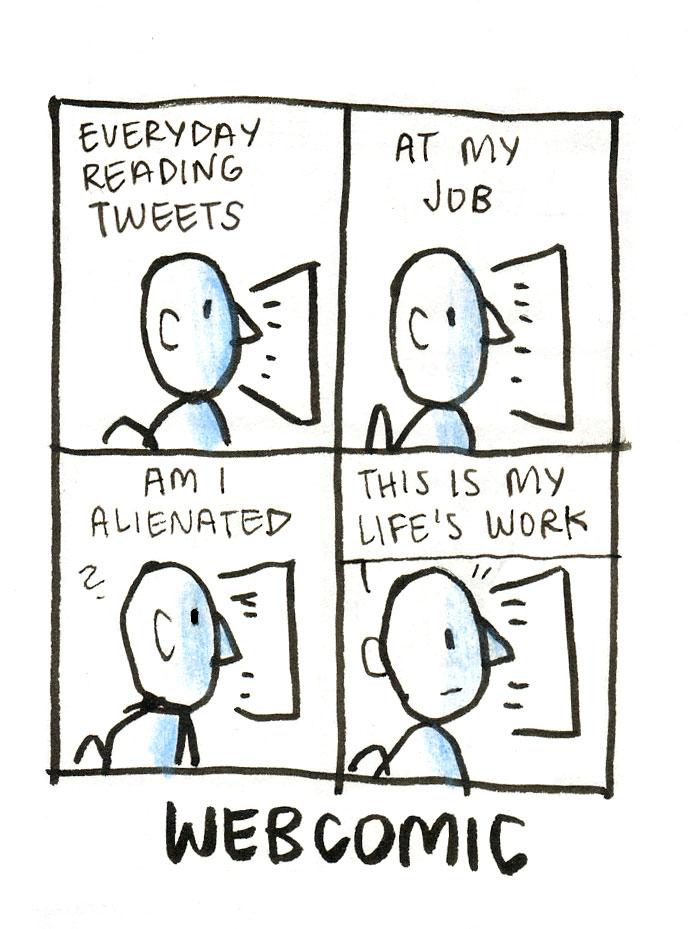 "We see first the mirror, then through the glass into infinite space."
-Jean Luc Heilegra, Method and Being 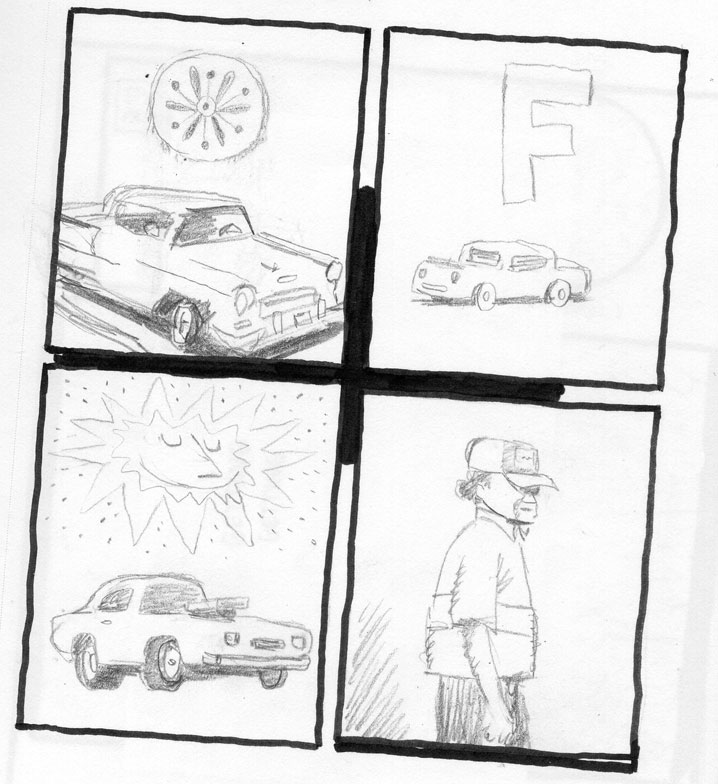 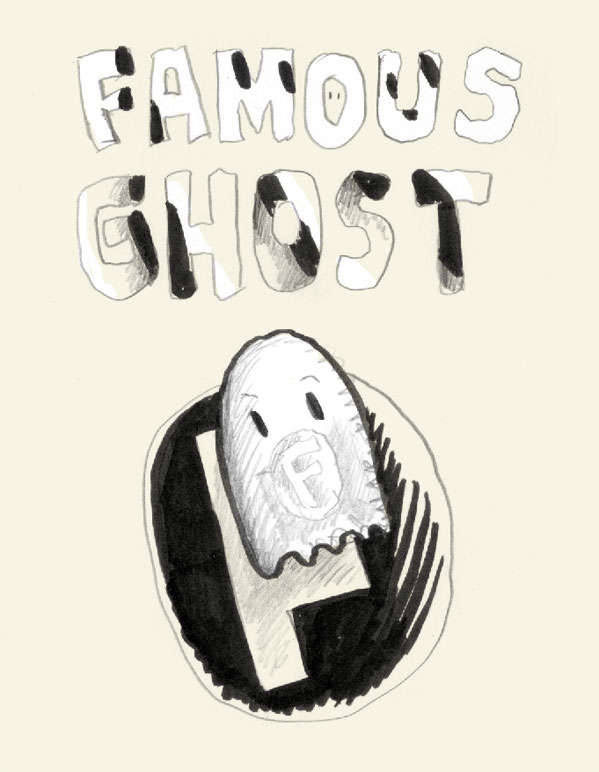 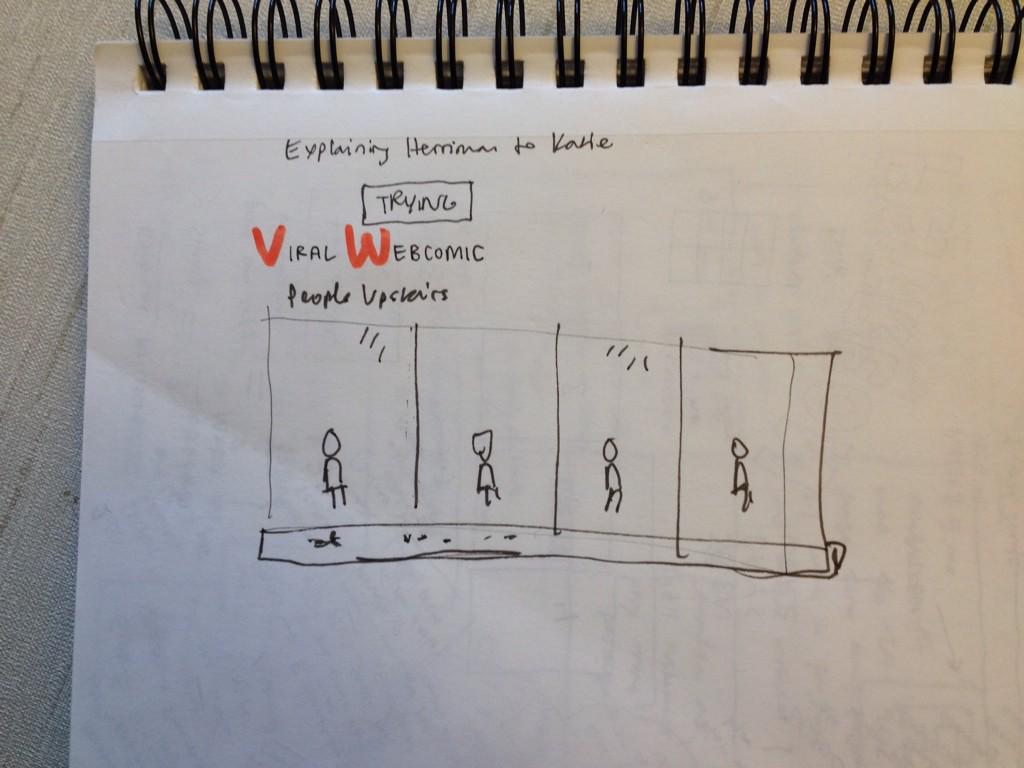 I have been thinking about Herriman and what amount of work he did every day, and wondering if I should base my life around that. I have no idea how much work he actually did every day, but OK, if you take the general newspaper cartoonist's workload as a model, let's say 4 panels per weekday, plus a Sunday. (I know Herriman's daily strips were much more complicated than a Peanuts strip—see here—but I'm trying to be somewhat realistic here about what I can actually accomplish). So, going by, say, a standard Gasoline Alley Sunday page this would add another 12 panels (plus a header).  So 6x4=24 (or should we take Saturday off? we're pro-union here) plus 12 is 36 panels? That's 6 panels a day, Sundays off. I was also thinking about Herriman's strip "The Family Upstairs," which I have not read very much of, and wondering the setup was supposed to be some kind of allegory?

Planning the Year Ahead 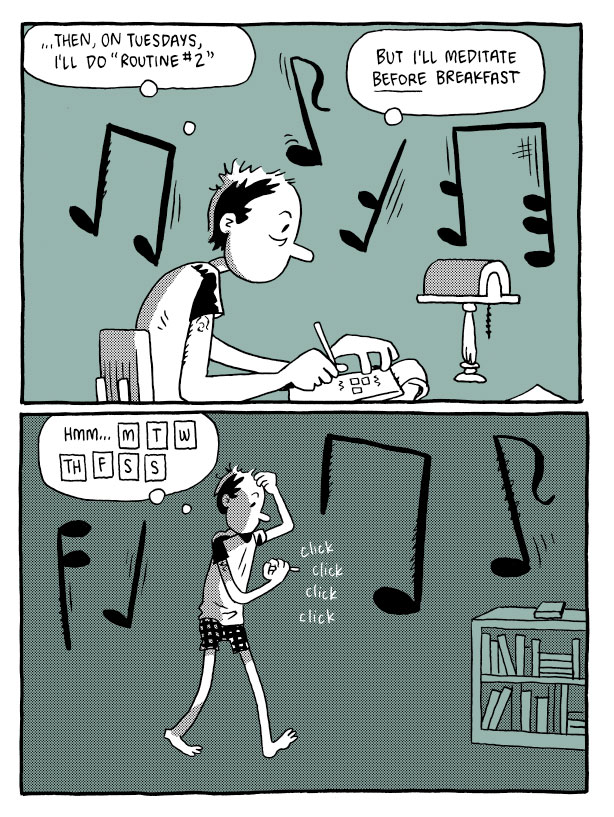 -from Ganges 3
No comments: