(Cross posted from my bookblog.)

(I read this book while at the same time reading Dynamics in Action by Alicia Juarrero. I finished Deacon's book first. I decided to read them together, because Juarrero has formally accused Deacon of plagiarism. You can read about that here and here. Read the comments on the latter for more. Anyways I'm trying to get my head around the ideas first.)

Daniel Dennett's review from last December is a good place to start. There are many other reviews of this book around the web, so I won't struggle too much with trying to summarize the ideas. I got a big kick out of reading Deacon's other book, Symbolic Species (link to my write up). That book was about the dialectical co-evolution of language and the brain, and this newer book (2011) is in a way about the co-evolution of self-organizing forms. Both of these books seemed very "dialectical" to me, but I honestly still don't know if I'm using that word correctly or if I'm only using it in my own private way. Anyhow the idea is that as simple material forms work through their thermodynamic changes they can come together in mutually supportive ways to create new meta-forms (like what happens with crystals or whirlpools), which can then combine to form more complex forms-of-forms-of-forms which can be said in a extremely primitive way to look after themselves, to work to persist in their current arrangement of forms, and to reproduce and evolve. Deacon calls this primitive life-form an "autogen." (Juarrero sometimes uses the phrase "structured structuring structures" which I guess she got from Antonio Damasio.) It only really exists in theory, but his point is that it's not a totally crazy idea that something like that could have come together billions of years ago on Earth. It doesn't violate the laws of physics.

I associate this kind of "leveling-up" or differentiation with dialectics. In Symbolic Species the 3-part dialectic you needed to get your head around was Charles Peirce's icon > index > symbol. In this book, there's another nested 3-part structure: thermodynamic > morphodynamic > teleodynamic. (Peirce again makes a few cameos here.) The complex lifeforms we know and love evolved after billions of years of teleodynamic activity. There are also difficult chapters that discuss the concepts of information and work in terms of this dialectic.

Deacon discusses how in theory this dialectical geometric logic could unfold in simple material systems, and then towards the end discusses how this logic can apply to what we know about brains and consciousness. The sections on brains were of course what I was interested in. They felt intuitively right to me, for what it's worth, and the parallels with Buddhist ideas were obvious and exciting to see.

He argues against the idea that consciousness and life are to be understood in merely linear terms, such as mechanism/function, or information/computation. Instead we should pay attention to how life emerges from forms of thermodynamic and morphodynamic energy flows which use geometrical arrangements to pit physical processes against each other in order to perpetuate far-from-equilibrium structures. Thus new formal arrangements become new efficient causes. The parts affect the whole, the whole affects the parts. As new arrangements of forms persist, new possibilities arise for new systems and relationships between forms to emerge, and as these affect the ability of the sub-forms to survive and reproduce the new meta-arrangements persist insofar as the sub-forms which support them are selected to perpetuate them. Wholes support parts which support wholes. In this way forms "level-up" into new meta-forms (these are my words for thinking about it). Once these forms (which at this point are no longer merely material, but are self-perpetuating forms-of-forms, and so exist as it were in the spaces between matter, and are "absential" (to use one of Deacon's many neologisms)) found ways to use the patterns of DNA and RNA molecules to integrate different areas of themselves they got really good at generating different architectures for staying alive and reproducing. At this level the material form of the organism is in a sense beside the point—the point is the whole dynamic arrangement of self-perpetuating form (which is parasitic on matter but also paradoxically independent in the sense that it is a dynamic matter/form combo, "more than the sum of its parts" at any one moment, emergent and absential).

A lot of this is standard evolution stuff, but what I guess Deacon is saying is that the important thing is to follow the formal logic of nested spiraling yin/yangs of presences and absences all the way down to the basic level of thermodynamics and back up again in order to see how life and consciousness are best understood in terms of a dialectic of dynamic processes. The higher levels at which information and function and consciousness seem paradoxical only make sense if you take into account the whole multi-dimensional dialectic of presence and absence.

So did Aristotle nail it? All four causes are accounted for and back in action. There's a lot of discussion of Aristotle in this book and Dynamics in Action, which I look forward to finishing. Greek science's turn toward the timeless and mathematical and away from the contextually embedded narrative description is a big issue in that book. What about Lao Tse? "Clay is fashioned into vessels but it is on their empty hollowness that their use depends.” (Deacon quotes this too.) Deacon also discusses the "discovery" of zero as analogous to what he is trying to say about absential "things." (More often he uses the word "ententional" to refer to these absent forms that make a difference. I don't think that word is going to catch on.)

I haven't mentioned how difficult to read this book is yet. It's not super bad, but it's pretty difficult. He coins a lot of new words, which normally I'm fine with, and even wish more writers would do, but other reviewers have felt it was a bit much. You need to have a pretty basic understanding of physics and biology. I'm no master wordsmith but I couldn't help but feel at times like he could have explained things more clearly and that he was making it more difficult than was necessary. I'd love to take a crack at diagramming or drawing comics about the ideas in this book and Juarrero's book. Deacon throws in a few diagrams, but it seems to me like visualization would really help. Saying "figure/background reversal" over and over doesn't quite drive the point home without an illustration, like one of these.

Just a reminder, some of my original art is for sale over at the Beguiling Art Store.
2 comments:

Email ThisBlogThis!Share to TwitterShare to FacebookShare to Pinterest
Tags: for sale

Here's some diagrams I drew while reading Philosophy and the Mirror of Nature by Richard Rorty last year. I don't expect these diagrams will necessarily make much sense to anyone since I'm using my own, like, private language, which is still under construction. Nor will they clear up anything about the book, which is anyways already pretty clear, I think. In other words, I didn't draw them to illustrate the book. (Though I would like to do more comics or diagrams to clearly illustrate philosophy or nonfiction books someday. If you're looking to put out an edition of Mirror of Nature with illustrations by Kevin H, please give me a call!) But these fall more in the category of "inspired by" or notes to myself. All the stuff about dialectics are my own ideas and I'm not even sure I know what I'm talking about yet. Ideally I would type out some paragraphs trying to explain what you're looking at, but I think I'll just put them up as is for now. 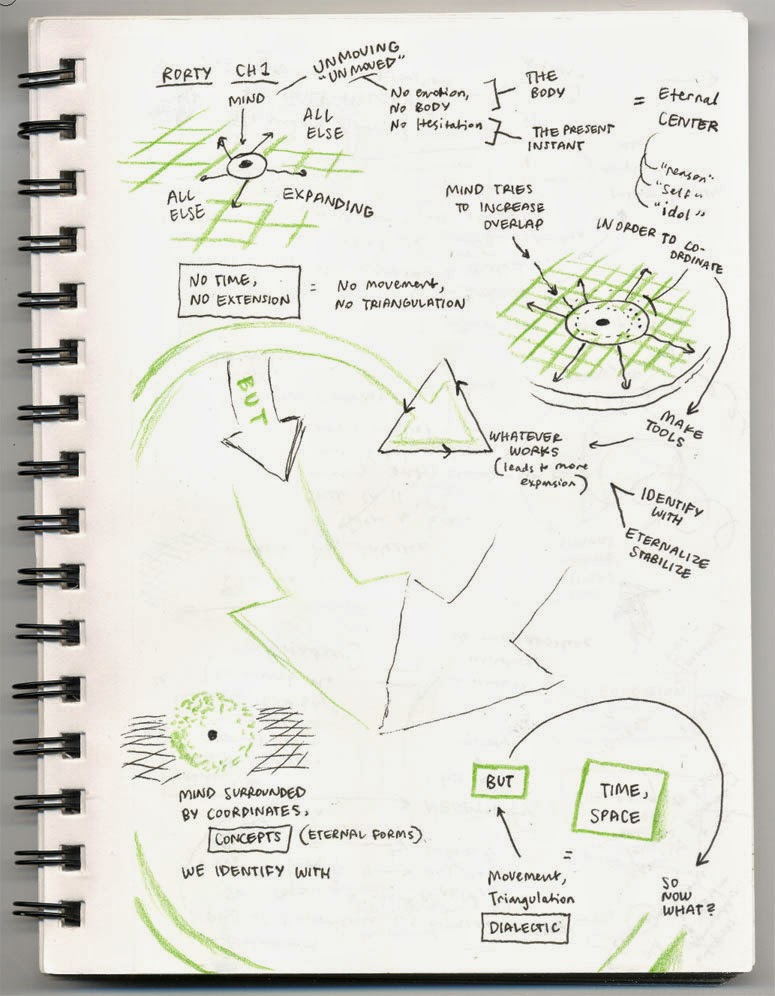 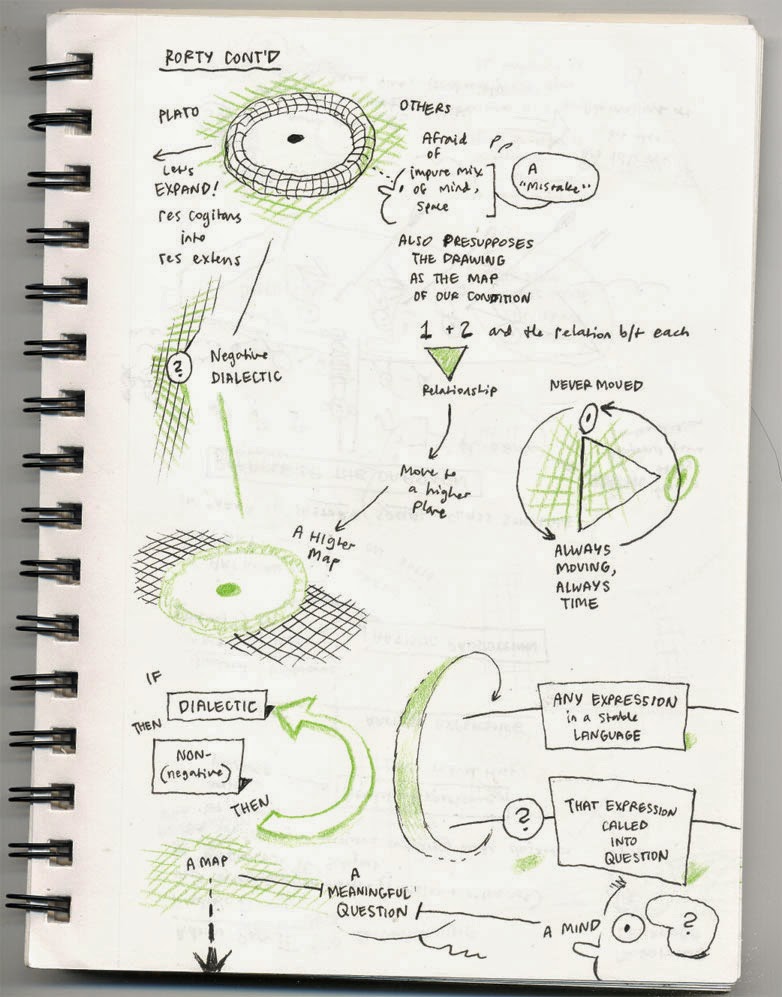 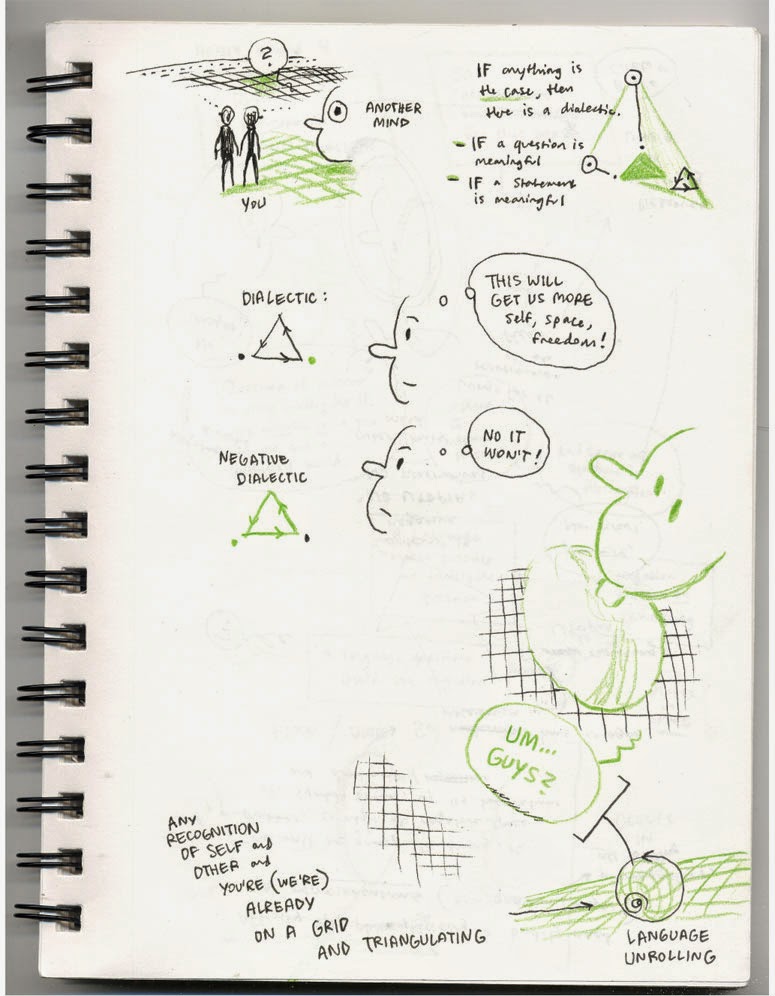 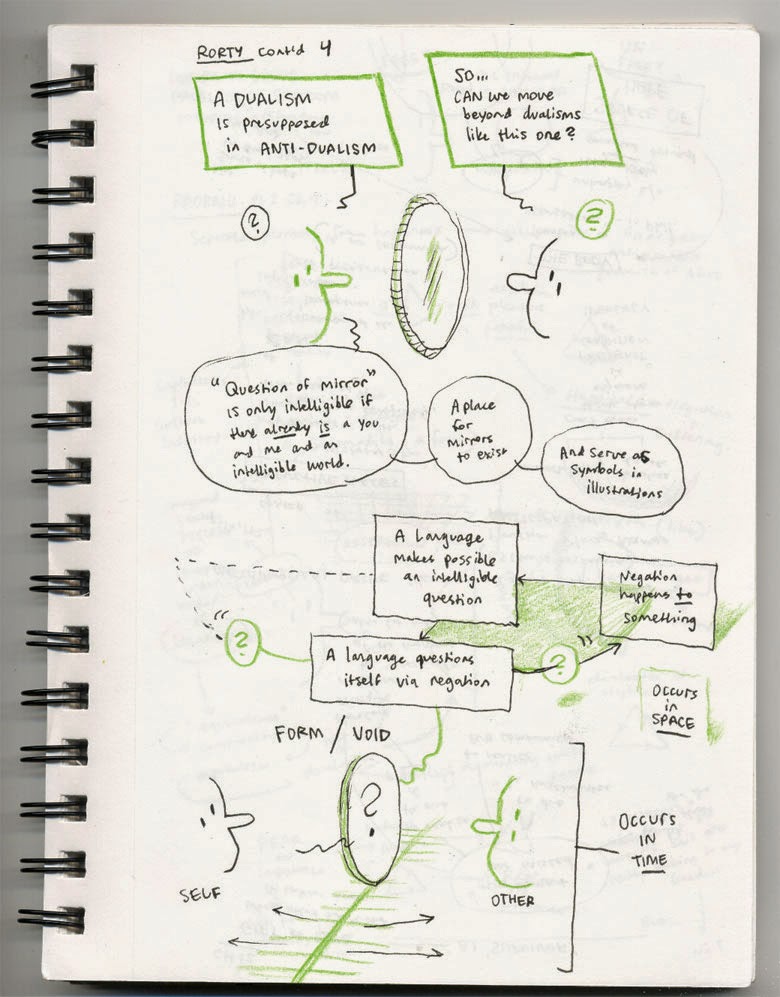