It’s weird that animals are shown in “tree” diagrams. Seems insulting to animals. But, an animal diagram of trees? I don’t know.

I think books which survey a variety of forms should include at least one chapter to play around and suggest new possibilities and new forms, and forms of forms. Even if some ideas are kind of dumb, as above. But obviously I’m not just talking about making jokes. Editors may frown, careful not to go “beyond the scope of the book." It’s true that Trees of Life is already 350 pages, and I’m sure many interesting tree diagrams couldn't fit. But if you're going to draw attention to forms, systems, or formal systems, etc., with this kind of history or survey, it would also be valuable to take some space to experiment at this elevated, meta-level and scope out the boundaries of the territory and draw some sketches of what you see from up there. 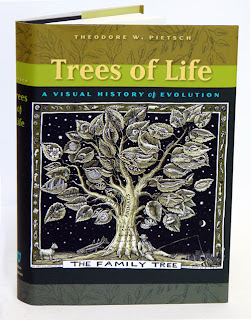 The form that this book (which its author, Theodore W. Pietsch, calls “a celebration”) takes is that of a standard book with chapters, notes, a bibliography and an index. The chapters consist of brief commentary on a species of tree diagram, and then examples follow, crisply reproduced. I thought the text was interesting and to-the-point, but I also wish the book was more ambitious. Not to seem ungrateful, but it left me wanting more (see above). Again, space was probably the issue. Maybe a positive way to put it would be that it opens up a lot of possibilities.

The book begins by discussing the varieties of bracket diagrams used to show taxonomic relationships before the discovery of evolution, and then the development of varieties of tree diagram types, and on from there into boring-looking—but more densely meaningful—computer-aided trees which depend on DNA data and statistics. By the end of the book you’re very sensitive** to how the forms that diagrams take can represent and misrepresent the messy and complex reality of natural history, and you can’t help but be dissatisfied both with the limitations of ink-on-paper tree diagrams and of books.*** Obvously a 3D computer-generated tree that you could rotate and zoom in and out of would be pretty great, and it seems totally doable, too—something huge and editable with many nested hierarchies and expandable branches, like you find in mind-mapping programs.****


Other than the Quinarians, my other favorite type of tree diagram from the book is where the diagram-maker opens up the 3rd dimension. Examples are below. Dissatisfaction with the limitations of form is on display big time. I think this may be what separates us from the animals?—the working memory capacity to stick with a form and evolve it, moment to moment, sensitive to how changes of form affect functionality, or sensitive to the possibility of bracketing it or framing it or abstracting “up” or “out” to other levels, or into new dimensions, and enjoying all of this, as we enjoy a good story or a joke.

(I added arrows and highlights to show what's happening in this one.)

* This evolution-of-evolution thing is just one of those things you have to deal with if you’re going to read about evolution. No writer could possibly still think it’s a witty move? But you can’t escape it. Just be tasteful and don’t overdo it. I avoided a chance to say something about “pruning” tree diagrams later in this review—that’s just gross. (Also, the author’s name is Pietsch?! Leave it alone.) There are probably unavoidable meta-groaners in every area of study, and there’s probably a survey article in Cabinet or something.

**Not for the first time, hopefully.

***Very good, though, is the unfolding of animal and plant forms on Earth, which makes up the real subject of all of this.

****Dissatisfaction with the forms of printed-book-divided-into-chapters and mind-mapping apps is beyond the scope of this blog post.